skip to main | skip to sidebar

One of my fantasies has always been to be a jazz DJ. I sort of got my chance, for the second time, this week on Chet Hanley's Jazz in the Modern Era. We put together a play list based upon my nove, Now's the Time, and then talked about the music and the book. Check it out:

Posted by Larry Strauss at 10:59 PM No comments:

It is easy to argue that straight ahead jazz, with its complexity and energy and spontaneous invention is the great jazz music and that the electronic soul jazz of the 1970s is somehow inferior. It's all too easy, too smooth. It just couldn't be anything too special. But when a sound can transport you--when simplicity is a small beauty, is a desert rose on a thorny day--then how can we deny its greatness.

MFSB--the soul ensemble responsible for, among other things, the Soul Train TV theme music--has never been taken very seriously as a jazz entity, but if a piece of music can capture a mood, can capture a time and place, the gray skies of those bleak days in the 1970s when urban American seemed to be dying of a soul sickness but with enough good people, dazed good people stumbling around believing in their communities, believing in the future.

For me, My Mood isn't just a personal statement. It's political. It's a revolution of hope against dispair, of seeing beauty in the gray sky backlit by the sun.
Posted by Larry Strauss at 10:06 PM No comments:

Lost and Found in the Digital Age

Ben Ratliff’s recent feature in The New York Times reminds us all how much great music might still be out there on recordings buried away in boxes, attics, garages. In this case unreleased jazz gems by Coleman Hawkins were discovered amid in a collection of recordings donated by the estate of William Savory, a recording engineer from the 1930s.

In my novel, Now’s the Time, protagonist Didi Heron finds a twenty year old reel of vintage bebop—the last recording made by her father and the legendary trumpeter with whom he played. She finds it in the discarded trench coat of a man the world has presumed dead for more than a decade. In a sense, the man and music he’s carrying have ceased to exist—except that they haven’t exactly. Recording technology

It is hard to imagine any current work of recorded music—great or not so great—ever being lost, even for a moment. Digital technology has given us the means to preserve pretty much any image or sound we want. I wonder if this gargantuan sum of recordings will help us appreciate all the great performances that occurred before it was possible to record, reproduced and ultimately digitized and burned into the permanent memory of human culture.

There have been science fiction stories involving time machines—from HG Wells’s book to last years Hot Tub Time Machine movie. To my knowledge, not a single one of these stories finds the time traveler bringing a video or audio recording device to the globe theater for opening night of Hamlet or to 18th Century Vienna to hear the premier of Don Giovonni, etc.

Posted by Larry Strauss at 11:48 PM No comments:

Latin jazz began almost at the inception of bebop, but Horace Silver brought in some many other rhythms and musical shapes from around the world and helped make our great American art form a universal collage.

And Song for My Father--

He gave us the Baghdad Blues--

Posted by Larry Strauss at 5:34 PM No comments:

Ray Bryant: Griot at the Piano 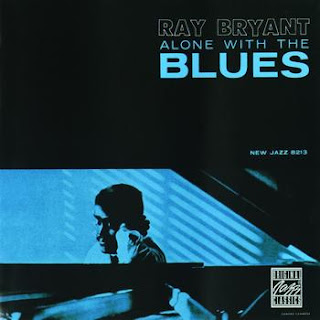 My father, John Strauss, won a grammy award for best classical album of 1984. That album was the sound track to the film Amadeus, which he was credited as producer. He had supervised the music of the film and ran the dubbing session for the LP for film producer Saul Zaentz who never exactly paid him for the extra days work. What he did offer him was any album in the Prestige Records library, which he had purchased several years before for $1 each.

My father brought me the catalogue and I went nuts checking off what I wanted. So much Coletrane, Miles, Monk, and on and on. My father made a few selections of his own, including a little known jazz/blues pianist named Ray Bryant. Someone had recommended him. Somehow, the company ended up sending two copies of that one and I ended up with one.

I never listened to it until years later when I was teaching James Baldwin’s “Sonny’s Blues” to an 11th grade English class. It frustrated me that my students couldn’t hear the music in the story, especially the last scene when Sonny is at the piano and his brother is finally listening. Having been into jazz for what was then half my life, it all seemed so obvious to me. I played my students some Louis Armstrong, Duke Ellington, Monk, Miles, Bird, Coltrane to give them the feel of jazz—but none of that music quite illustrate what the fictional Sonny is playing in the climactic moments of the story. Hours at my CD changer and record player and I finally cracked the seal on my copy of Ran Bryant, Alone with the Blues. And that was it. His solo piano, the transcendent sound of the blues as a statement about the vast life spectrum of joy and pain, was like a painter’s stroke rendering a room full of suddenly introspective young faces.

I read that last scene of “Sonny’s Blues” for them with Ray Bryant playing in the background, pausing to let Ray say what needed to be said, what needed to be emphasized, letting his cadence work with Baldwin’s narrative poetry—and when it was over my students and I understood that something really special had happened. All at once we all seemed to realize the point of the story—that Sonny was telling the family history at that piano.

I don’t believe Ray Bryant was thinking about “Sonny’s Blues” when he laid down those tracks.

I don’t think he had to.
Posted by Larry Strauss at 9:04 PM No comments: 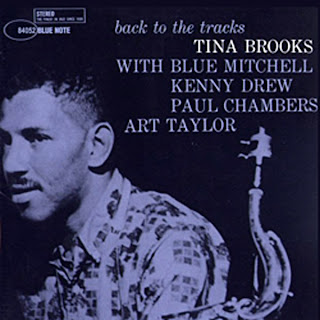 It’s kind of a stupid question but I wonder still—why is it that men with such disordered lives could impose such order on the air with their music?

The obvious answer might be that the disorder in their lives probably inspired the musical order. Still, it’s a remarkable dichotomy, I think. These sounds seem to make everything make sense. For me they make life seem simple and beautiful. And make me believe that Tina Brooks and Blue Mitchell, Kenny Drew and PC and AT all understood that.

Posted by Larry Strauss at 10:39 PM No comments:

Long before digital downloads there was the public library. In Santa Monica you could borrow twenty LPs at a time and I always checked out the max. Some were fairly new and clean copies but most of the good stuff was old and frayed and a little scratched up. The scratches sometimes added character to the sounds. Some of the album covers were faced. Others were completely destroyed, the vinyl exiled to a blank sleeve and tiny handwriting half-explaining what was inside. A few compilations said nothing anywhere about the music. I always sampled a few of these at a time and some became my favorites. I’d dub them onto a cassette tape for the car and them until the tape jammed or snapped. Then I’d try to find those same blank cardboard record covers in the library’s jazz racks.

Sometimes I’d catch one of those favorites on the radio—usually an upbeat, uptempo thing, horns harmonizing over a tight rhythm section. I’d listen out for the who and the what and sometimes I got it:

Art Blakey and the Jazz Messengers, Down Under.

I remembered those cuts and when I had a little money to spend in the record store I’d find the albums on which those tunes were originally recorded.

Over the years, I think I’ve picked up most of those sides but there are still a few I’ve never heard, never been able to identify. I wonder sometimes if I’d even remember them now, thirty-plus years later, if I heard them.

Posted by Larry Strauss at 12:26 AM No comments: